1. St. Basil’s Cathedral in Moscow: don’t confuse it with the Kremlin

St. Basil’s Cathedral (also known as the Cathedral of the Intercession of the Virgin by the moat) is an Orthodox church on the Red Square in Moscow and constitutes the symbol or icon of the city.

You definitely must visit both its interior and exterior as its architectural style is unique. It was declared in 1990 a World Heritage Site by UNESCO, along with the entire Kremlin.

Keep in mind that St. Basil’s Cathedral is not the main cathedral in Moscow, nor is the headquarters of the Orthodox Patriarch of Moscow, since in both cases this honor belongs to the Cathedral of Christ the Savior.

Many people confuse this cathedral with the Moscow Kremlin, since they are situated next to each other, but the truth is that they are not absolutely related. The visit to this cathedral is often complemented with other tourist attractions also located in the Red Square and the Kremlin, Lenin’s Mausoleum or GUM department store.

2. The origins of St. Basil’s Cathedral

The construction of the St. Basil’s Cathedral in Moscow was ordered by the Tsar Ivan the Terrible, and was conducted between 1555 and 1561, to celebrate the conquest of the Khanate of Kazan.

According to legend, the czar blinded Postnik Yakovlev, the architect of this cathedral, so he could not build a church that was better than this one, though it is known that this is not true since Yakovlev also participated in the construction of the Kremlin of Kazan some years after.

Throughout its history (in 2016 it will be 455 years old), the cathedral has been in danger of disappearing on more than one occasion, surviving fires, Napoleon’s invasion and even a demolition plan by Stalin collaborators , who considered that the cathedral hindered military parades in Red Square.

3. What to see in St. Basil’s Cathedral in Moscow

Outside the cathedral you can see its beautiful domes, all different, which highlight a its striking colorful and rounded shapes. In front of the church, in a garden, a bronze statue stands in honor of Dmitry Pozharsky and Kuzma Minin, who gathered volunteers for the army that fought against the Polish invaders during the Time of the Riots (between 1598 and 1613).

I recommend seeing this cathedral with night lighting too 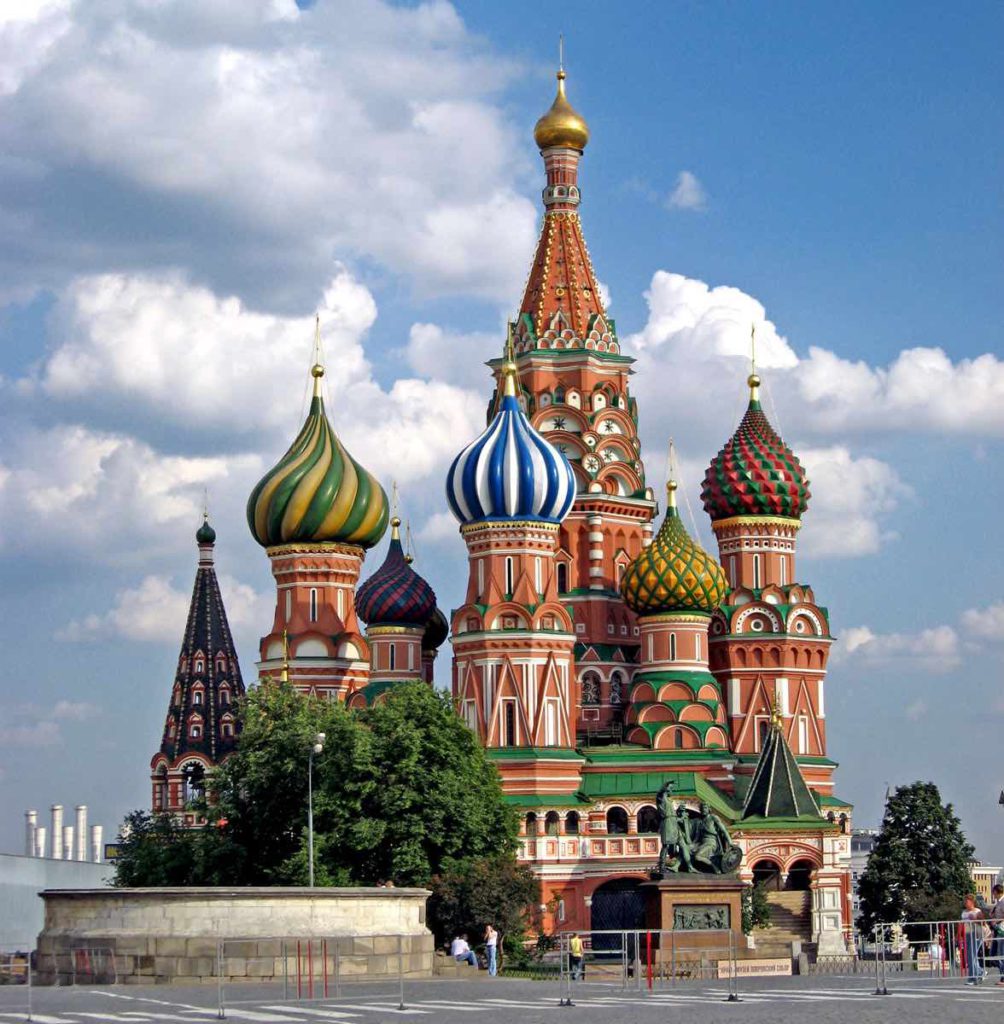 Inside many people expect to find a huge room given its external dimensions, but St. Basil’s Cathedral is composed of nine rooms or chapels, each decorated differently and dedicated to each of the saints on whose festivities Ivan the Terrible won a battle. For this reason, its interior is like a maze.

In some of the chapels you can find groups of choirs singing,

You can visit the St. Basil’s Cathedral in Moscow in approximately 1 hour or even less. The schedules are as follows:

Closes the first Wednesday of each month for cleaning. The ticket office closes 45 minutes before closing time.

Tickets are purchased at the cathedral itself. Also they can be purchased online: https://tickets.shm.ru/en/#id=1.

Buying tickets online is very simple. Note that you have the option to buy the normal ticket (700 rubles) or the audio guide ticket (1,200 rubles):

If you prefer, you can also take a guided tour through the GetYourGuide platform.

Finally, it is worth noting the rules for access to the cathedral:

5. Zaryadye Park: relax after the visit

At the end of your visit you can relax in Zaryadye Park, just behind the St. Basil’s Cathedral and opened officially in 2017.

In 2018, Time magazine included this park in its list of best places in the world. The park recreates the different landscapes of Russia and ends with a floating bridge over the Moskva River from which you can admire an impressive view of Moscow and the monuments in Red Square. The entrance to the park and the visit to its floating bridge are free.

Have you visited the Cathedral of St. Basil? You can leave your comment below

More than 400 pages with all the information you need to plan your trip to Russia online easily, cheaply and avoiding queues
END_OF_DOCUMENT_TOKEN_TO_BE_REPLACED